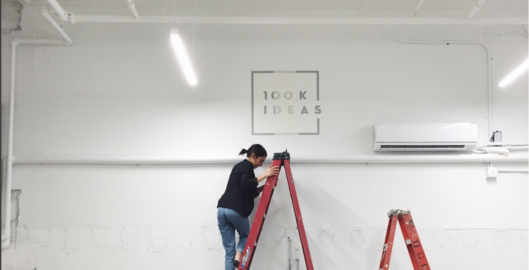 Maggie Henderson, Senior Collaborative Design student, documented and journaled her internship with Skypoint Ventures in Flint, MI. Below is an entry describing her design experience.

What is the first thing that comes to mind when you hear the words “Flint, Michigan”? Is it lethal drinking water? “Murder Capital” of the country? Unemployment rates? Abandoned buildings?

Believe it or not the city, formerly known as Vehicle City, was once a haven to which working class families flocked, seeking better lives. The Flint of yesterday, a picture of hope, stands in stark contrast to the bleak reality and even bleaker perception that remains of the city today. About a year ago, I was given the opportunity to help change that. And in turn, that opportunity changed my own notion on the range of impact that design can have on people and communities.

After landing a summer job with Flint-based venture capital firm, Skypoint Ventures, in May of 2017, I spent the following three months working alongside 11 other college students studying business, engineering, and design at places all over the country, from the University of Michigan to Georgetown University and all the way to the University of California Berkeley.
Operating in a cardboard alcove (via our first 100K Ideas client: a modular wall system called Divide By Design) while the restoration of the building next door was underway, we were tasked with developing and testing a service model for two new initiatives—the Flint Ferris Wheel co-working space and the nonprofit startup incubator 100K Ideas—aimed at retransforming Flint into a hub for design and entrepreneurship.

The Collaborative Design program has shaped me into a strong believer in an empathic approach to design – to seek to understand the perspectives of others, to persevere in the face of ambiguity, and that collaboration leads to innovation. This same ideology informed the process my fellow students and I went through to ensure a successful launch for the Flint Ferris Wheel and 100K Ideas.

The service model for 100k Ideas works like this: during initial meetings with our potential clients (free for the first hour), they would pitch us their idea for a product, service, or software, whether it was just in their heads, sketched out, or fully prototyped. We would then sit and benchmark any other similar ideas that already existed. If we found that something strikingly similar was already on the market, we would’ve encouraged them to pursue another idea. If the client’s idea showed originality and potential, however, in a neatly packaged and branded assessment binder for a flat $200. If the client was ready to take a step further, they would be charged at an hourly rate of $40 in exchange for the thinking, making and marketing of their idea.

This service model within the context of the Ferris Wheel co-working space does a number of things. First, it offers democratized access to innovation because anyone can walk through the revolving front door with an idea they wish to bring to fruition and be treated with respect, which is, quite frankly, a revolutionary concept in the business and innovation world. Second, with the generation of new ideas comes new manufacturing opportunities, opportunities inevitably close to where those ideas happen. One of the many things that I learned from, my boss, David, is that in order to invest in design and innovation, you have to invest in manufacturing. By doing that, 100K Ideas and the Flint Ferris Wheel are paving the way for sustainable economic growth for the Flint community.

Situated right next to the very office building where, over 100 years ago, Billy Durant started General Motors, the company that built the booming, mid-century middle class and once employed half of the city, these catalysts for entrepreneurship will help reignite the spark of ingenuity and forward thinking that defined Flint during its heyday as an epicenter of automotive manufacturing.

These initiatives will also continue to augment a workforce of college students with fresh skill sets, giving them paid opportunities to supplement their educations with real world experiences and empowering them to make meaningful contributions to society. I am a testament to this one; I felt genuinely valued for my contributions to the team and humbled to see my design displayed on a building, a token of a history in the making. I am still so grateful for having had the opportunity and I was reluctant to respond when July came and passed and David looked to me and asked “when do you turn into a pumpkin?”

A few months after I left to return back to school for the fall semester, I learned from a colleague that the Ferris Wheel and 100K Ideas had been nominated for a National Development Council (NDC) Academy Award by the Michigan Economic Development Corporation (MEDC). The awards would take place in Washington D.C. at the end of October at their three day, biennial event. My boss, David Ollila would be in attendance and he wanted the students who worked with him over the summer to accompany him. I RSVP’d immediately.
In three weeks time, I was headed to our nation’s capital where I learned we would have to convince the other attendees to vote for our project in order to win. Equipped with branded t- shirts and chapsticks, hundreds of brochures, cases of 100 Grand bars, and about seven boxes full of caramel corn, we set out to share our story with everyone that we could. As both the largest and youngest team of nominees in attendance (colorful booth and goodies aside), we were without a doubt disruptors. With seven of us, we covered a lot of territory throughout the course of the those three days, which were filled with presentations about economic development, networking sessions, and, of course, the awards ceremony. Our competition, the glamorous King’s Theatre restoration project from Brooklyn, New York, put up a respectable fight, but in the end, our story of redemption for the city of Flint spoke volumes, melted hearts and landed us the award.

Winning meant more than just a testament to the hard work that we all put in over the course of the summer, winning meant that we were successful in starting to change the world’s perception of Flint. Or better yet, we empowered Flint to change those perceptions itself and to restore the same spirit that drove the city to be one of the top manufacturing centers in the country so many years ago. That pioneering spirit runs deep, and I don’t believe it ever went away, it was just masked by the crises that ensued and the consequent state of turmoil that was leftover.

I’d like to believe that Flint has hurt enough to not make the same mistakes twice. When you hit rock bottom, the only direction you can go is up. The water crisis was scraping bedrock, now the reinforcement of the entrepreneurial, innovative spirit that will emanate from the Ferris Wheel ecosystem will be the ladder toward a renewed economic prosperity, one that is deep- rooted and far-reaching. In the words of our governor (after noting the “vibrant downtown” that has become of our own Grand Rapids), “it’s Flint’s turn.”